You are here: Home / European Travel / Things To Do In Luxembourg + Winterlights Christmas Market!

Luxembourg is a very small country in mainland Europe bordering Germany amongst other countries. Check out this blog post on how to spend a day in Luxembourg as well as checking out the Winterlights Christmas Market in Luxembourg City!

Hello everyone & welcome back to my blog! Last week I was doing some brainstorming and remembered that I haven’t published my blog about Luxembourg yet. We visited December of last year and it has been sitting in my drafts ever since.

Luxembourg is very small and you can pretty much see everything in one day. Their Winterlights Christmas Market was happening when we went and needless to say, I was very excited! Let’s get started 😌

▷ Luxembourg borders not only Germany but also France and Belgium.

▷ Even though Luxemburg is tiny, it is ranked as the second richest country in the world!

▷ It is also one of the safest countries in the world.

▷ Luxembourg is the only grand dutchy in the world.

▷ In Luxembourg, they speak French, German and Luxembourgish. Yup, you heard it! Luxembourgish is the national language and it was established in 1984.

▷ The stunning Moselle Valley also runs through Luxembourg. Check out my blog post about our visit to Cochem Castle to see pictures of the valley.

▷ Luxembourg is 8 times bigger than Malta. It’s in moments like these where I realise how small Malta really is haha! 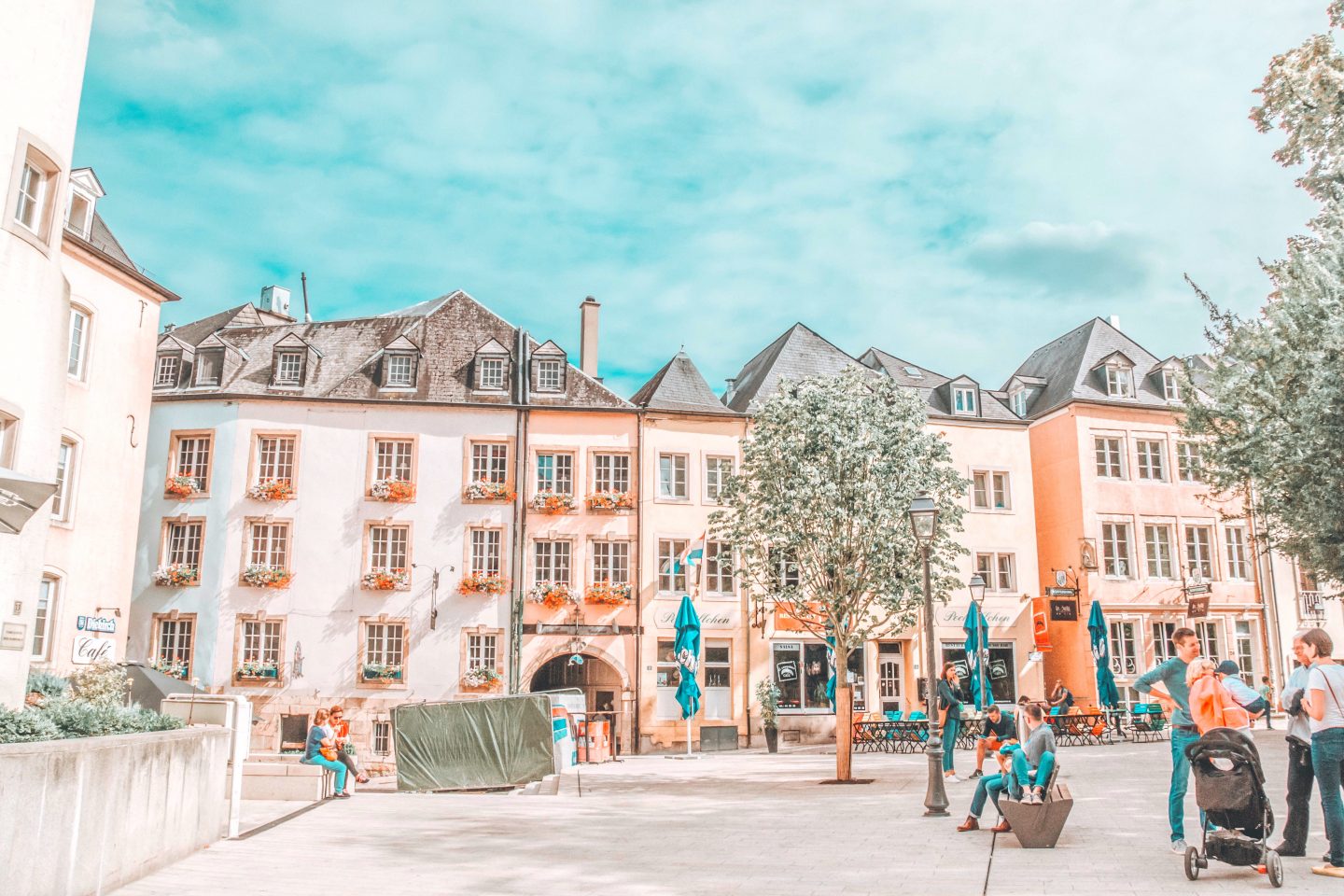 HOW TO GET TO LUXEMBOURG:

☆ Driving is the easiest option in my opinion. Luxembourg is only about 2 hours max from the KMC Area (Kaiserslautern Military Community) and it is a very easy drive.

☆ From my research, I found that there are no direct trains from Germany to Luxembourg. However, there is a train that arrives at Berlin but the commute is around 11 hours.

TIP: If you’re in Germany and you’re planning a trip, download the official DB App. You can book tickets via the app!

☆ I also saw that people were asking if you’d need a passport or Visa to go into Luxembourg. If you’re driving, no you don’t need to. If you’re an EU citizen, you don’t need to show anything because of the Schengen regulation. No one was there to inspect our documents when we crossed the border. If you’re military, just keep your international driver’s licence and military ID on you just in case. That’s what we did!

♡ We did not make use of public transportation as we only spent a day in Luxembourg City and walked around everywhere. However, Luxembourg has one of the best transport systems in Europe. Click here for more information.

♡ Furthermore, if you’re planning on driving like we did, you can find a number of parking spaces all over the city and country!

We didn’t need to book a hotel or apartment for our trip to Luxembourg because we only spent a day there. However, I did some research on the best places to stay at in Luxembourg and stumbled upon this article from Trip Advisor. If you’re planning a longer stay, I highly recommend reading it! 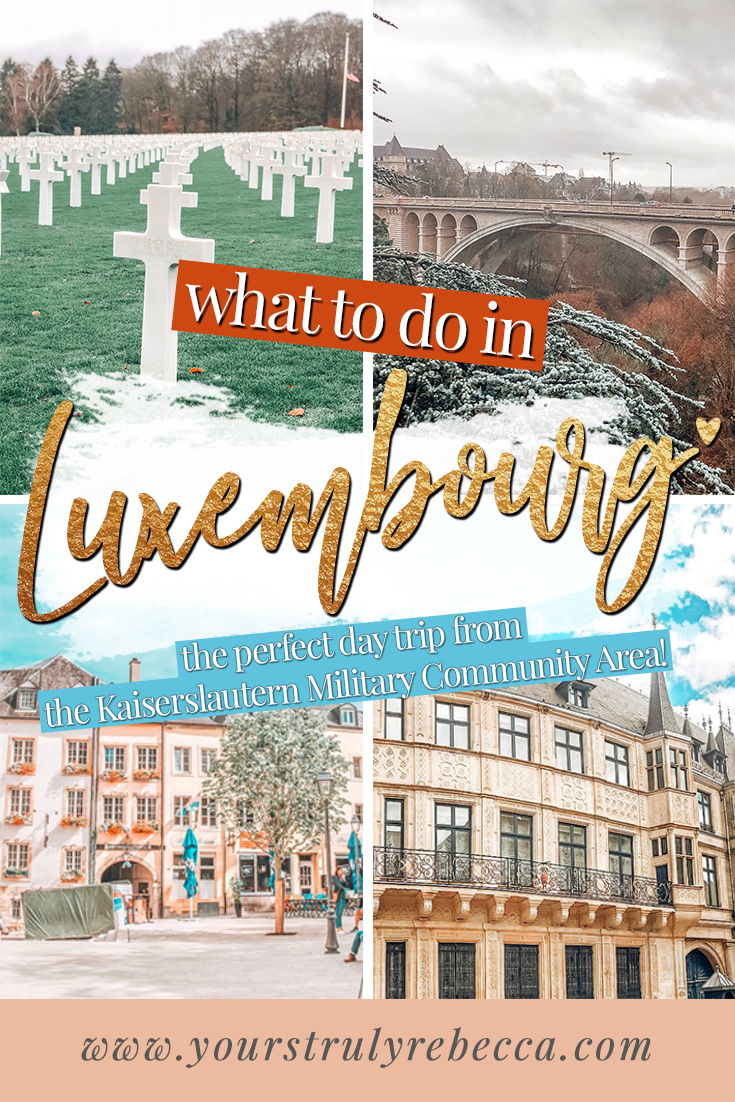 What to do & see in Luxembourg:

Perhaps one of the most famous sights in the country is the American cemetery and memorial. We headed there first before driving to Luxembourg City. The cemetery consists of 17 acres of land and even before going in, you can see the tombstones of the fallen soldiers. As soon as you walk in, the feeling is very sombre and quiet. 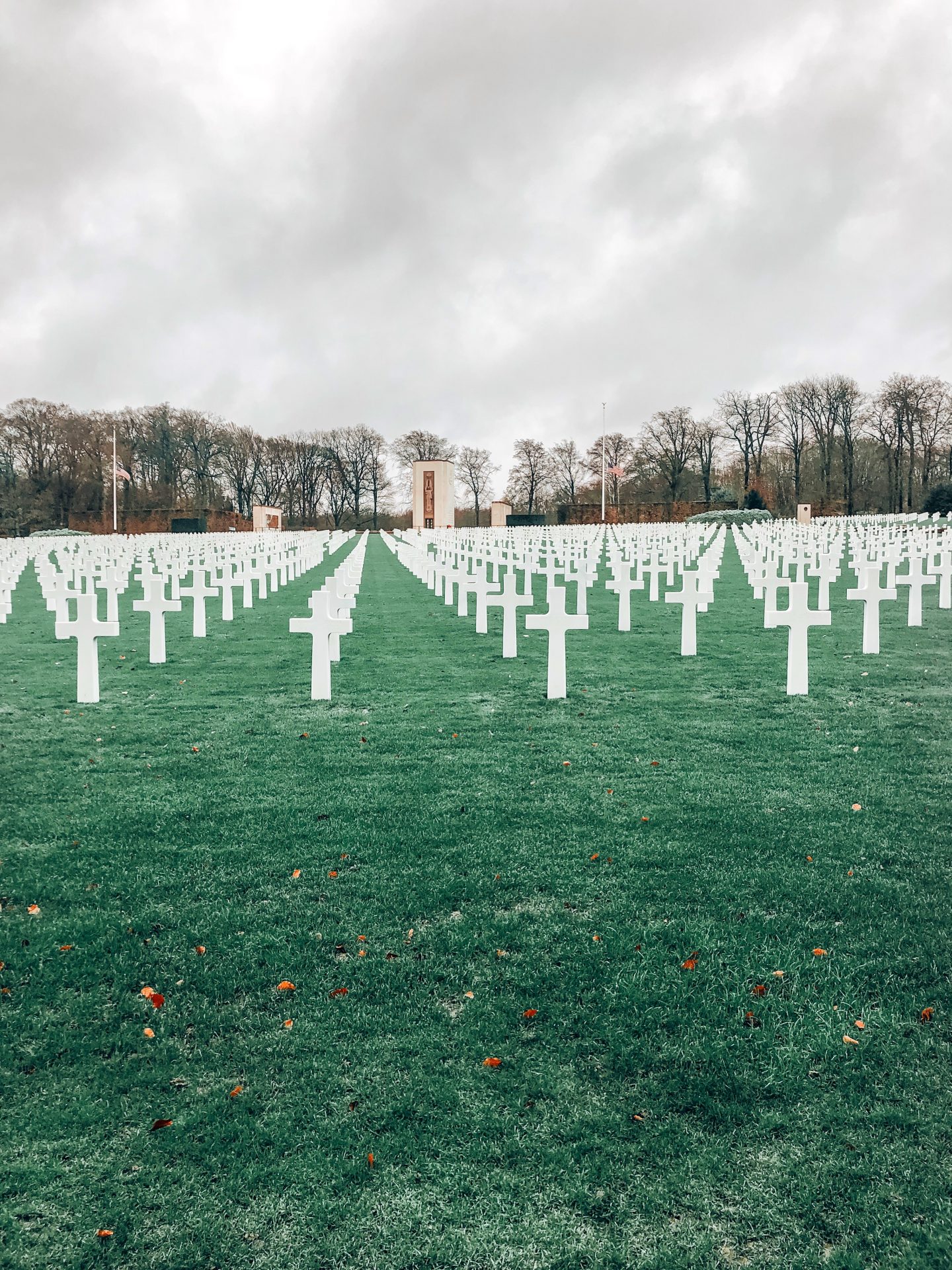 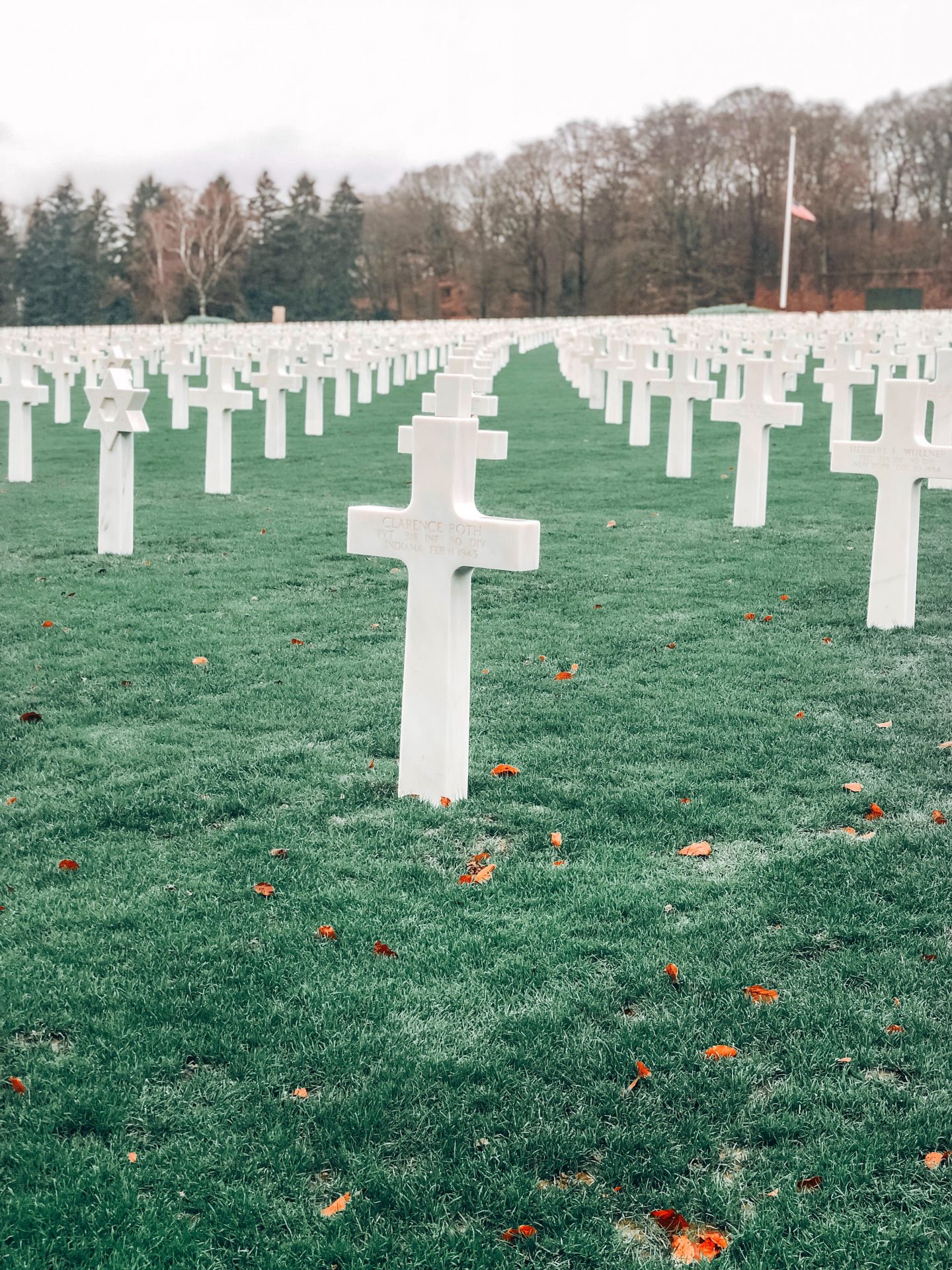 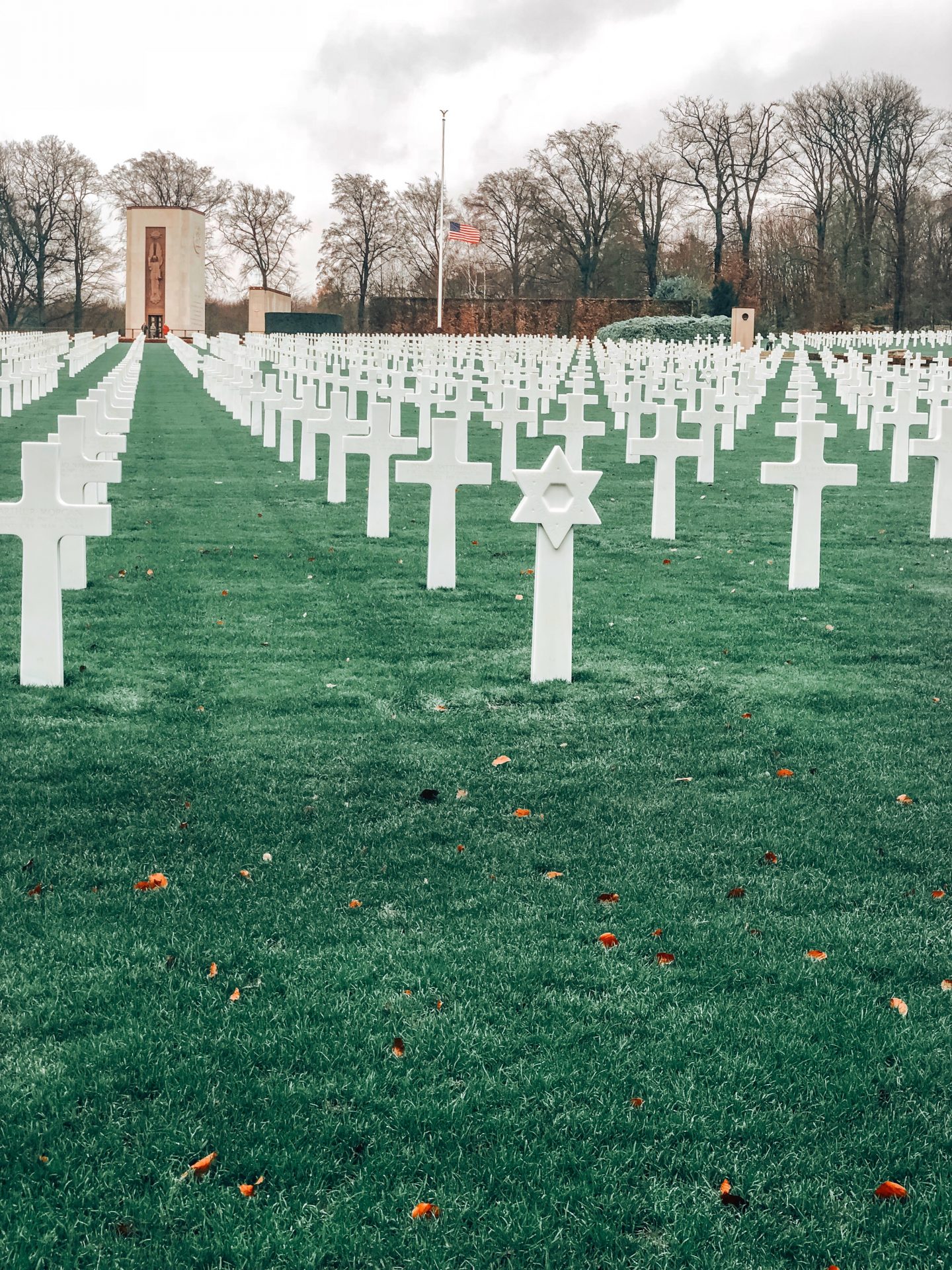 Luis informed me that General Patton is buried in Luxembourg. He bravely led the American Army throughout the Second World War and in a letter to his wife, he stated that he would like to be buried amongst the fallen soldiers in Europe. 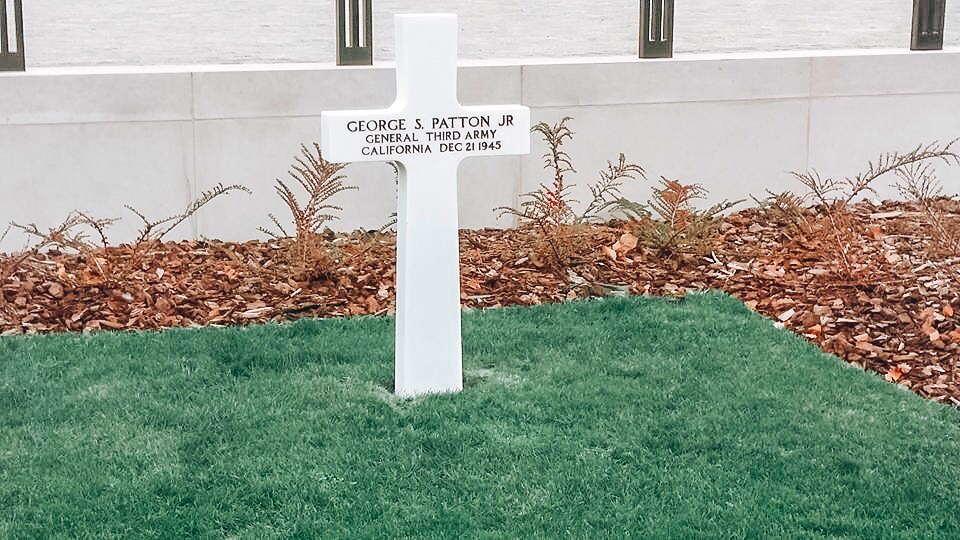 All over the cemetery, there are various plaques giving you more information about WW2 and a list of all the soldiers that are buried here. The majority of the soldiers buried here died during the Battle of the Bulge.

This bridge isn’t easy to miss at all. It located right next to the Place de la Constitution (which is where the Winterlights Christmas Market is held!). The Adolphe Bridge is an unofficial monument for the country, as well as a popular tourist attraction! There was a pretty big crowd taking pictures when we went. 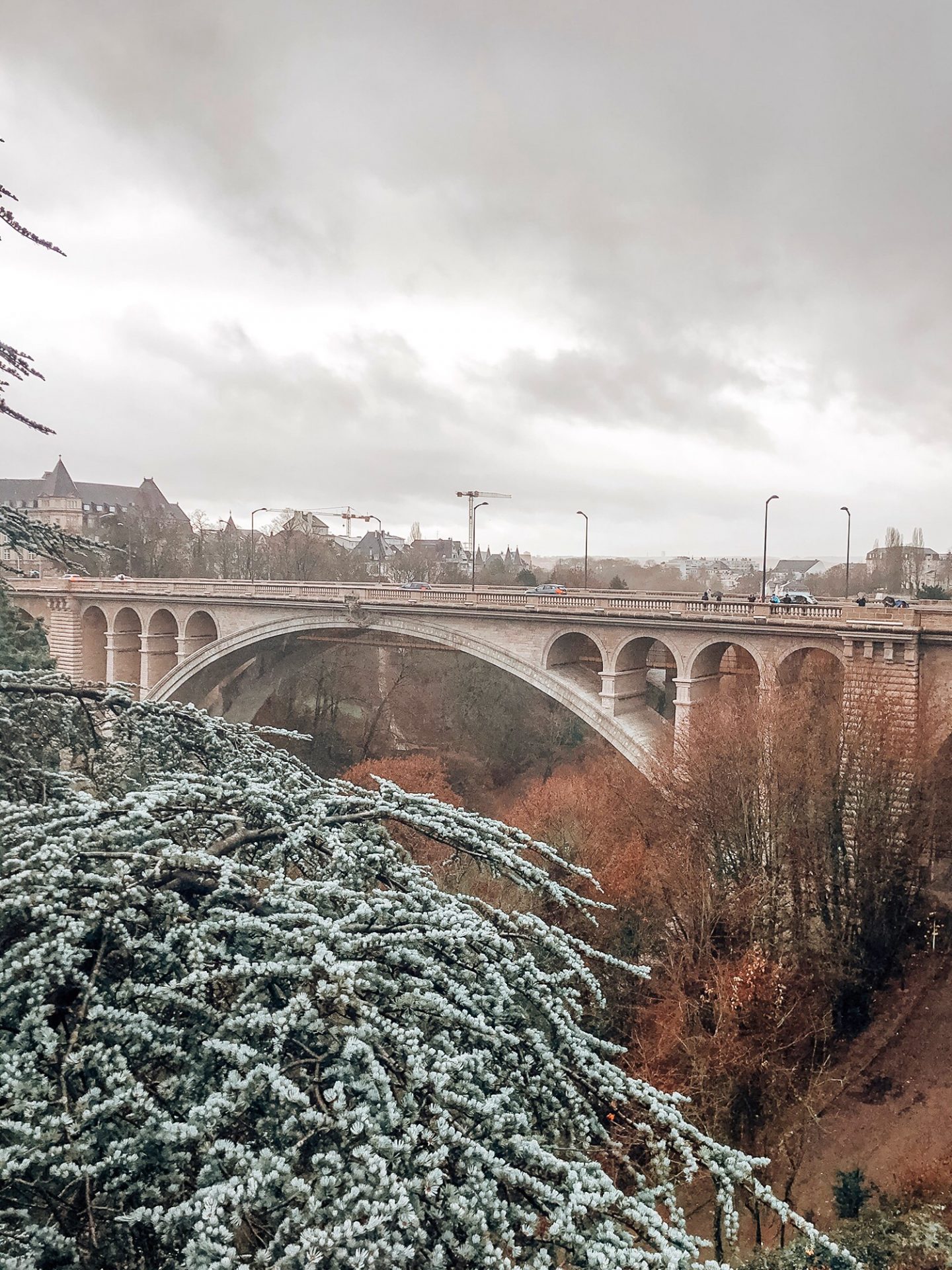 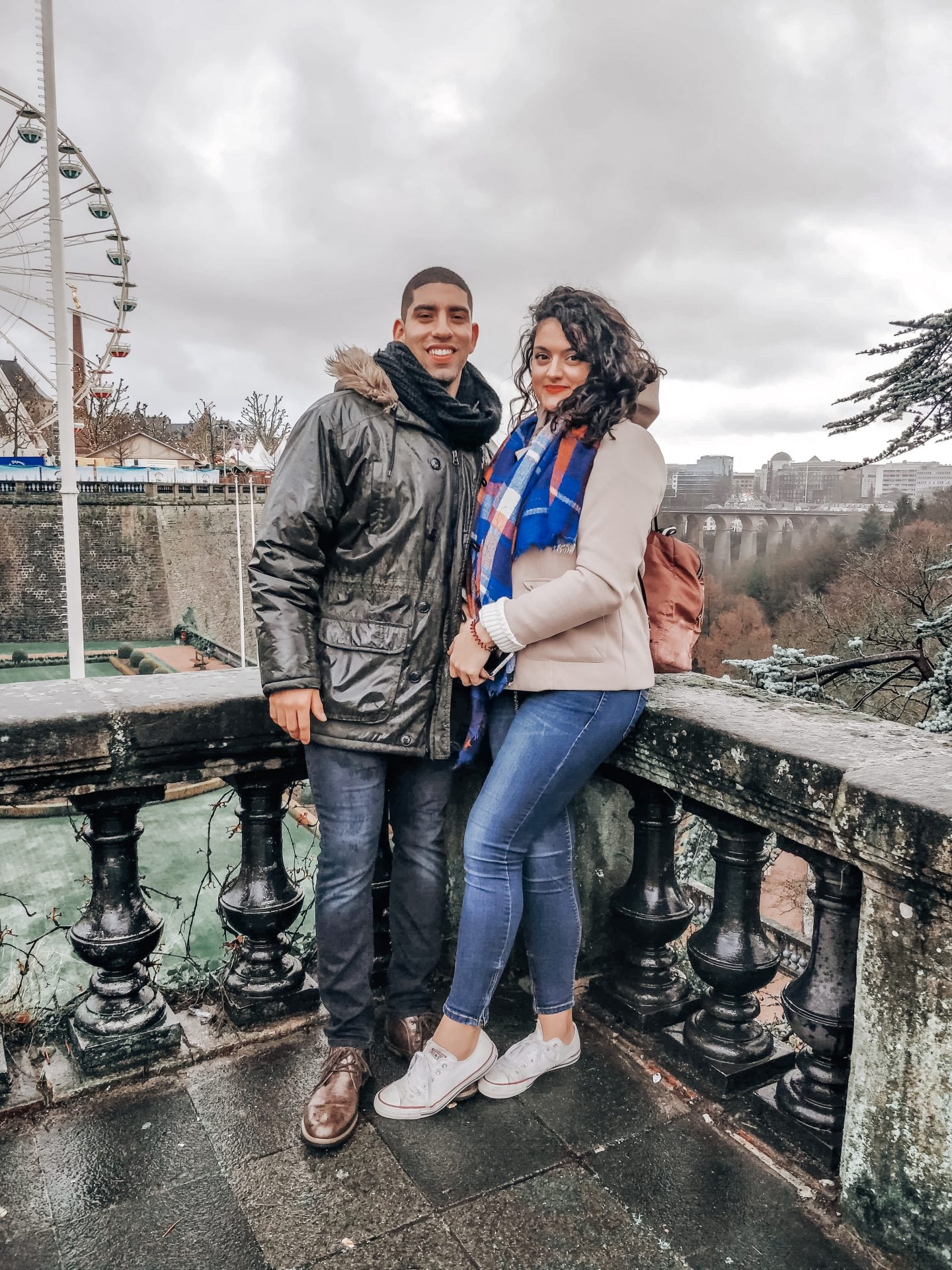 ✗ Take macaroons home with you:

You can’t go to Luxembourg (and France) and not get some macaroons! There was a small bakery on the way to the parking garage and stopped to buy us some. Unfortunately, I don’t remember the exact name of the bakery but there are tons all over the city! 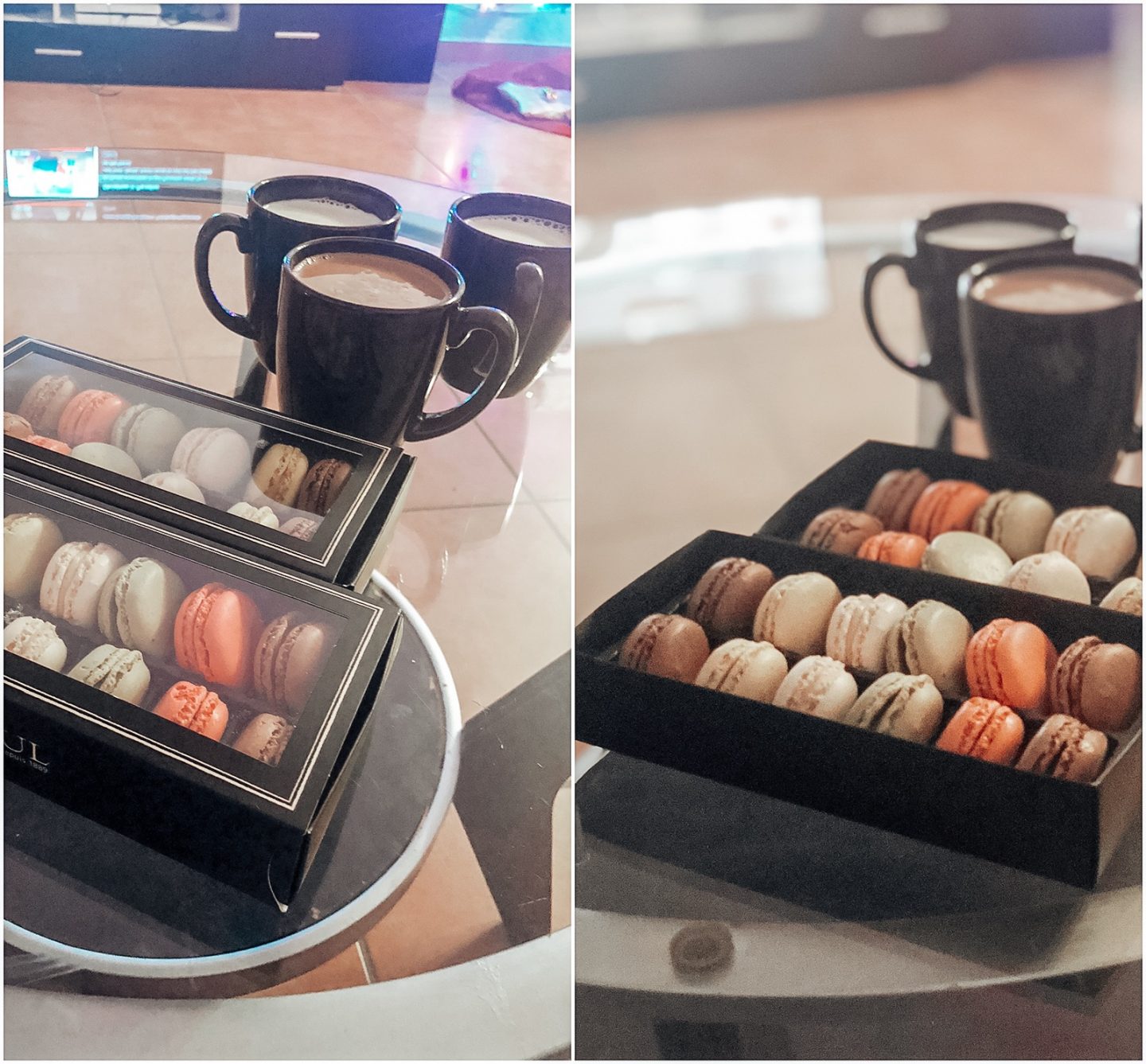 Just like any major European city,  there is a Cathedral! The Cathedral is located very close to the Constitution Square (mentioned above). The official name is the Cathedral of the Blessed Virgin. It is built in the Gothic style and it was first built way back in 1603! 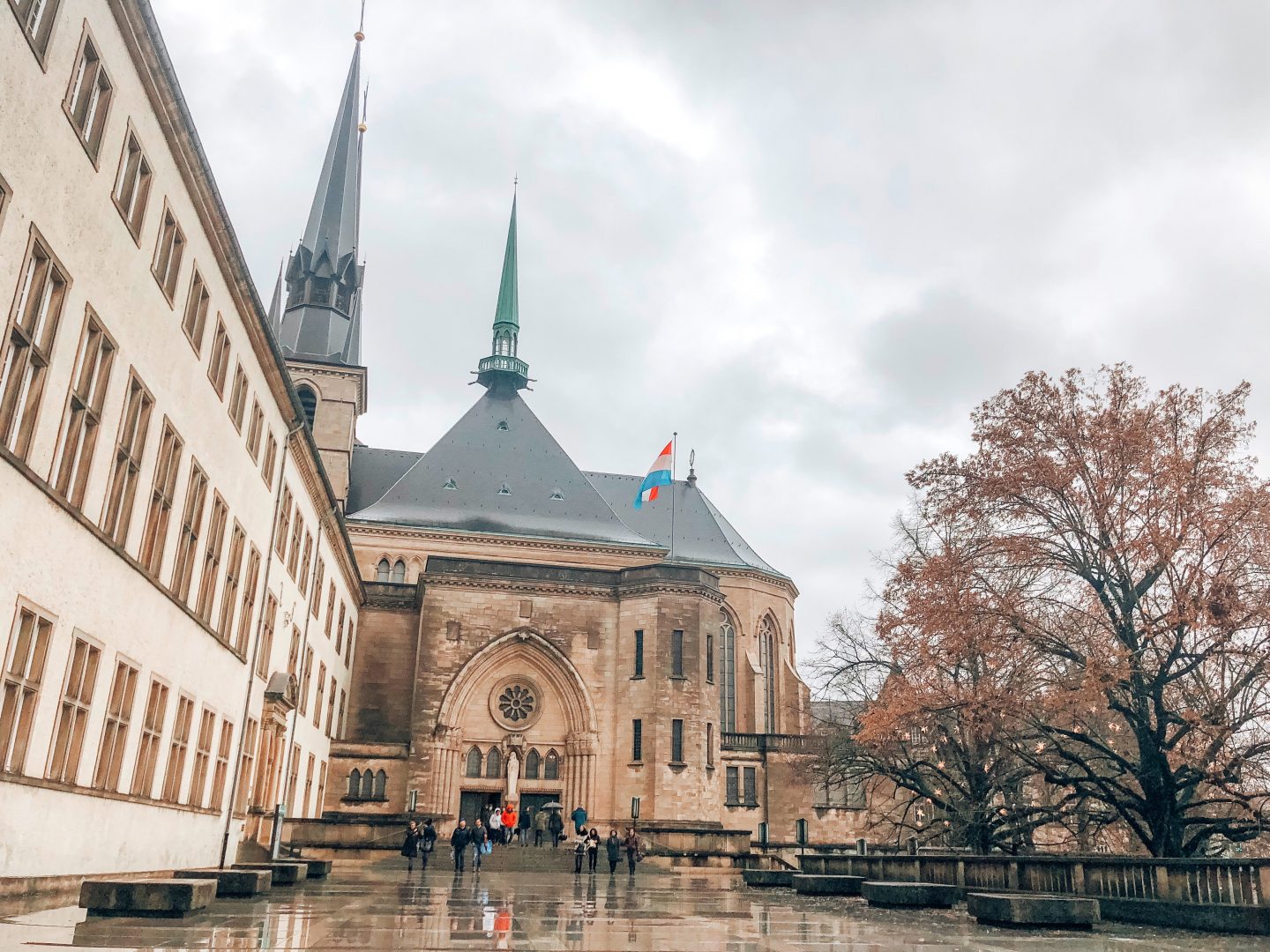 Entry to the Cathedral is permitted and you can leave a small donation if you’d like. 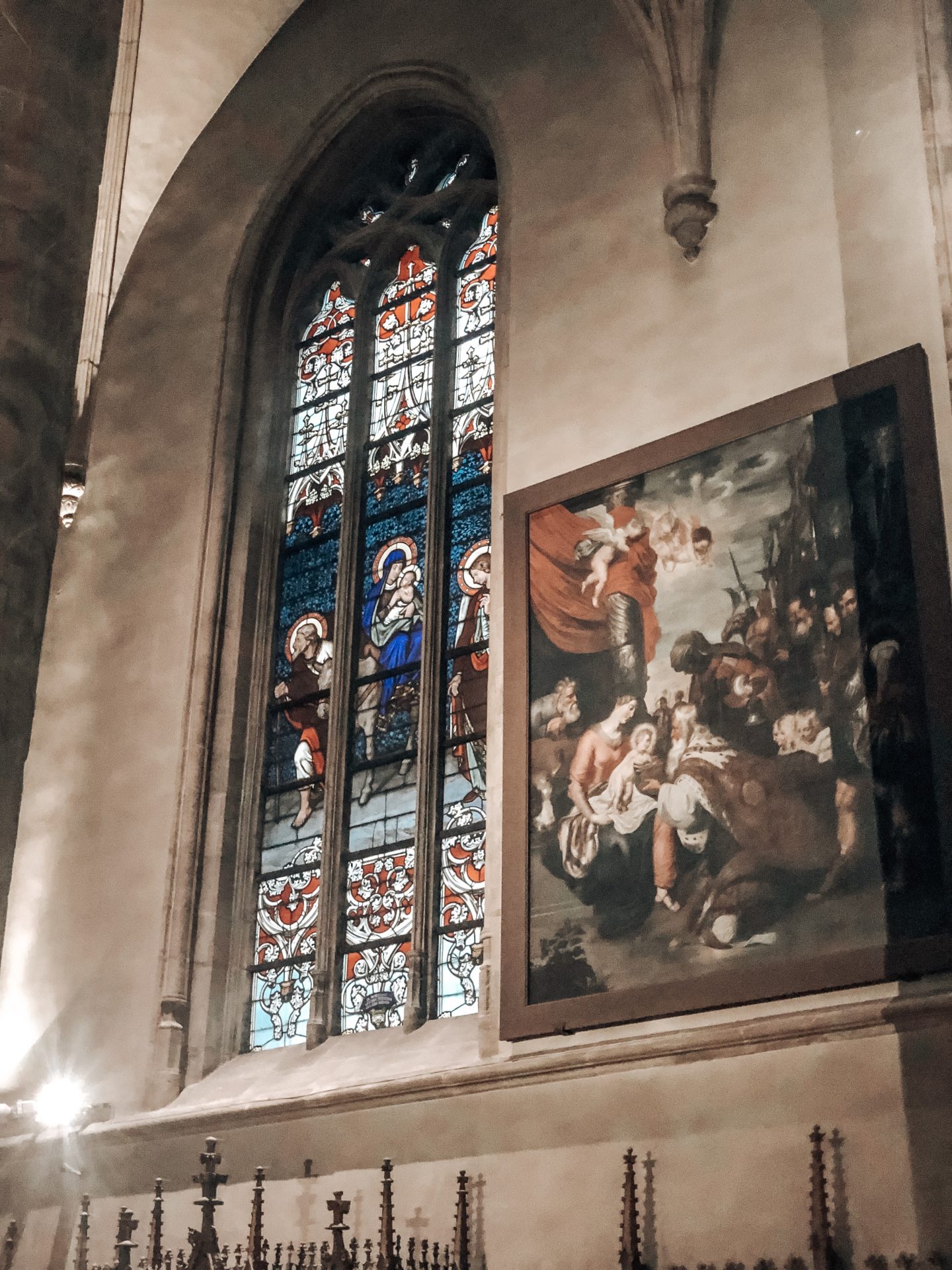 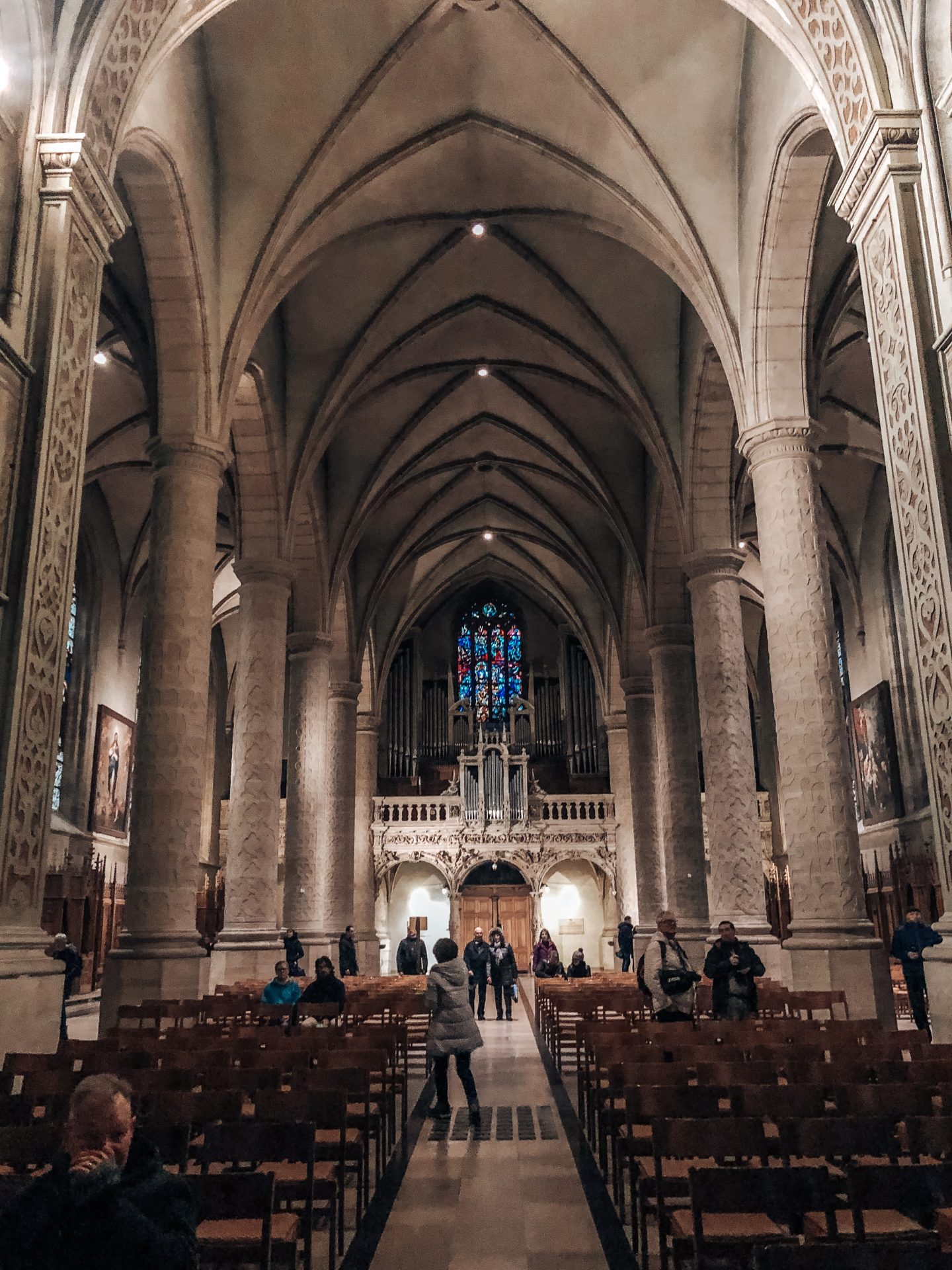 The Grand Dukal Palace is the official residence and it is one of the main tourist attractions. The palace is open to tourists during the Summer season. The Duke performs most of his duties as the head of state from this palace!

THE TOURS START JULY UNTIL THE END OF AUGUST. 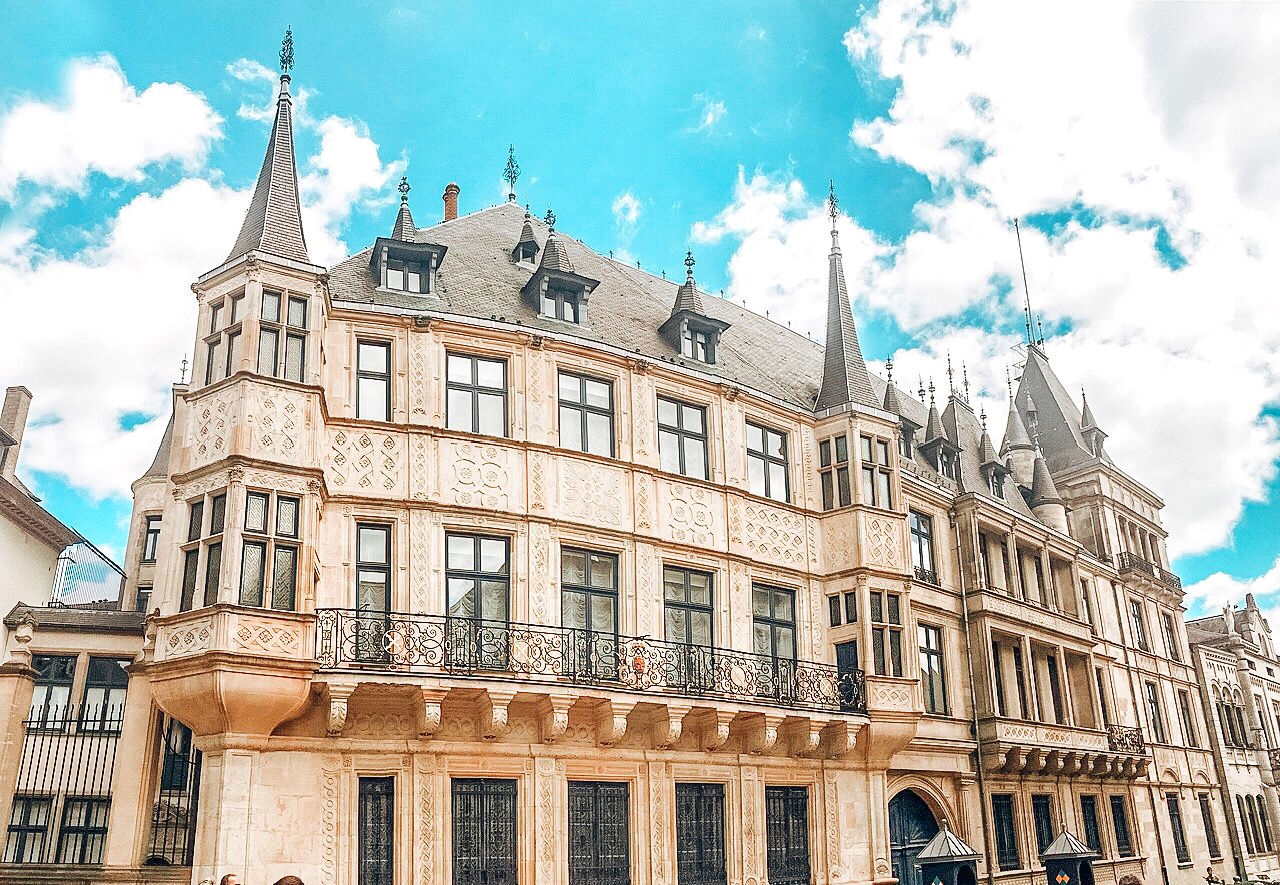 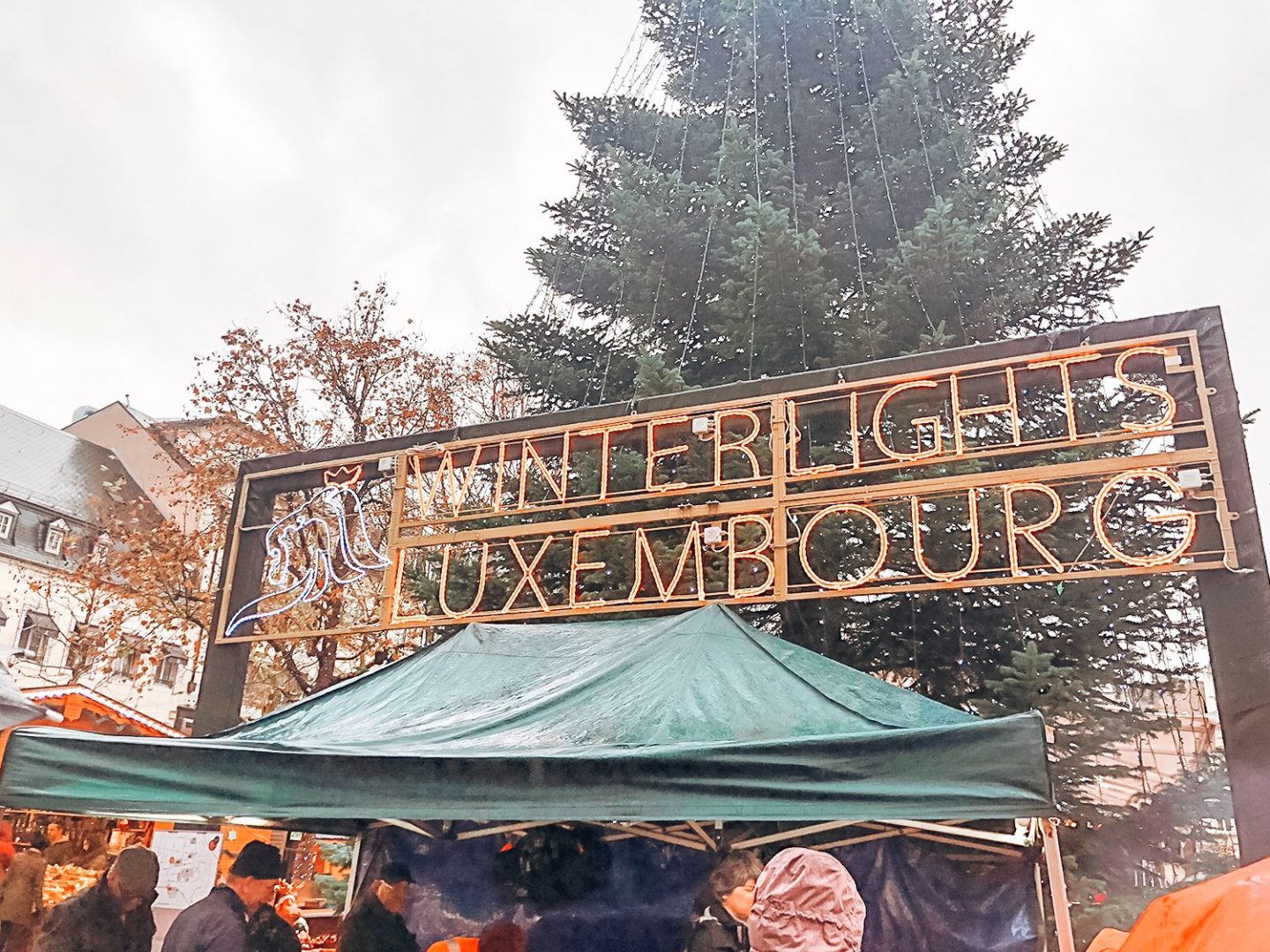 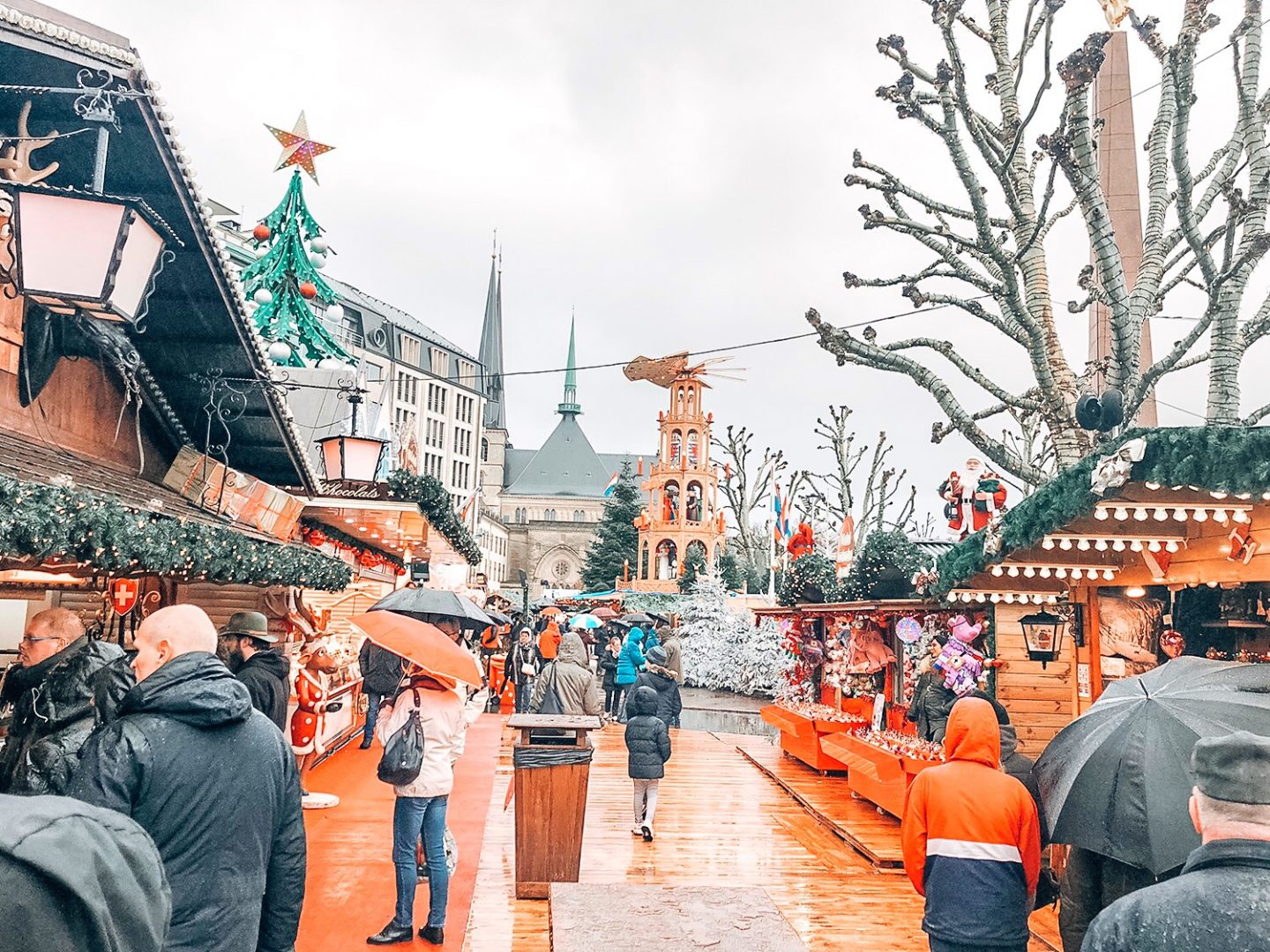 You can find anything you’d expect at a Christmas market. We had sausages with bread, mulled wine, candy and lots of fries! I loved this Christmas market so much that when my parents came to visit me a couple of weeks later, I took them there! 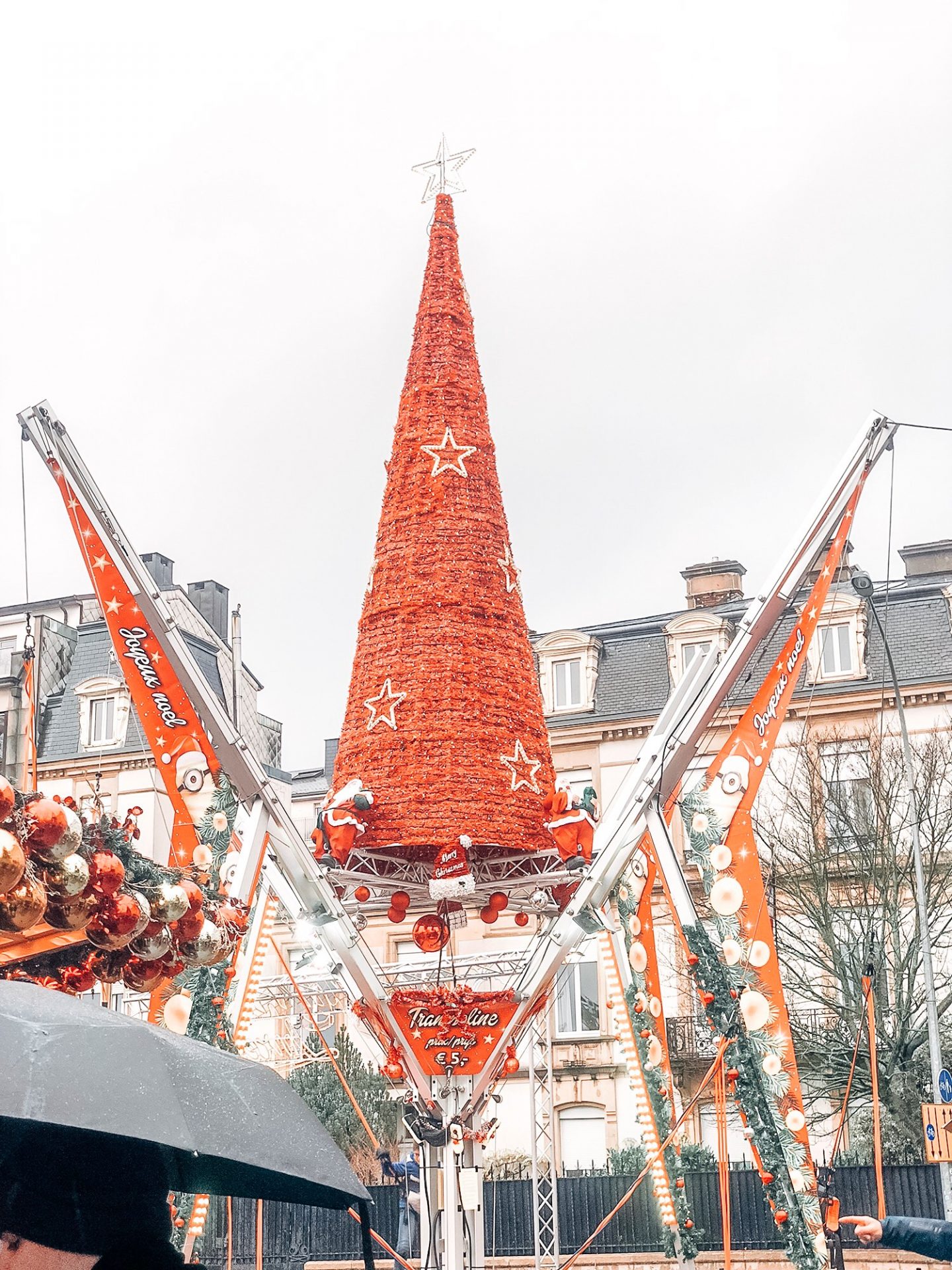 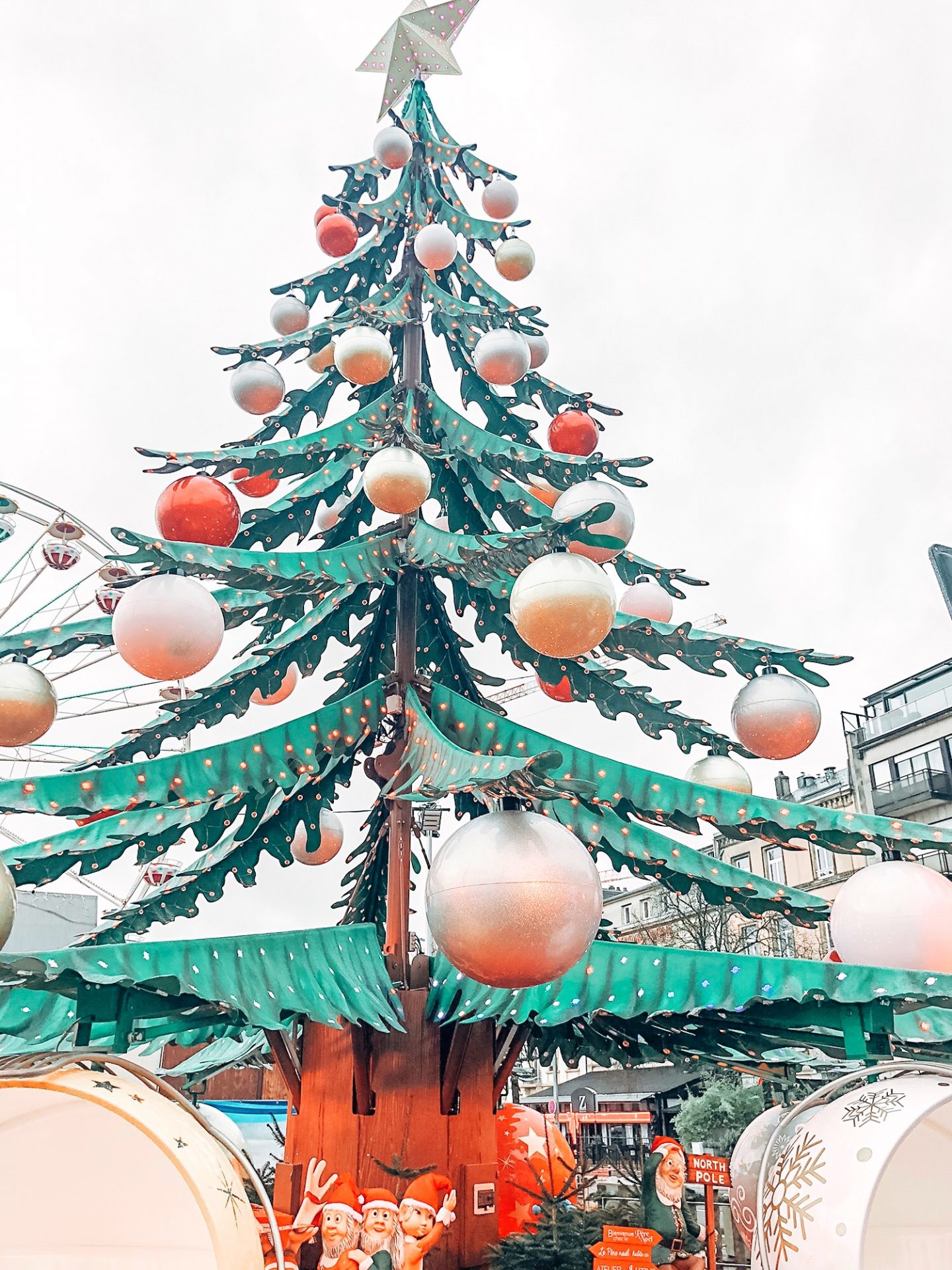 We had a blast walking around the market. One of my favourite things to do is walk to every stall and see what kind of things they sell. At the Christmas market in Luxembourg, they sold candles, clothes (which come in handy if you’re feeling cold!), wooden angels and one stall also had chocolate figures! They sold Christmas trees made out of chocolates, kitchenware and even purses. Looking back, I wish I purchased one!

Even though this market is smaller compared to other Christmas markets such as Cologne or Nuremberg in Germany, I highly recommend checking it out! As mentioned above, Luxembourg is an easy drive from Germany and you can easily fit in the market as well as checking out what Luxembourg City has to offer. 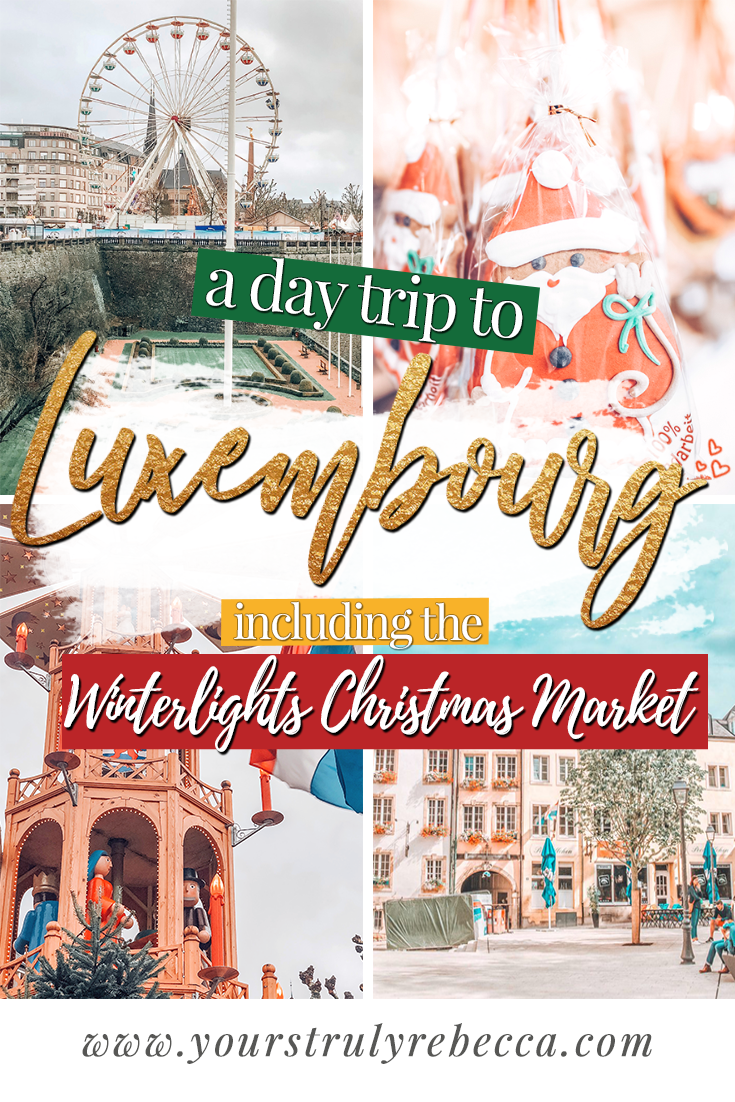 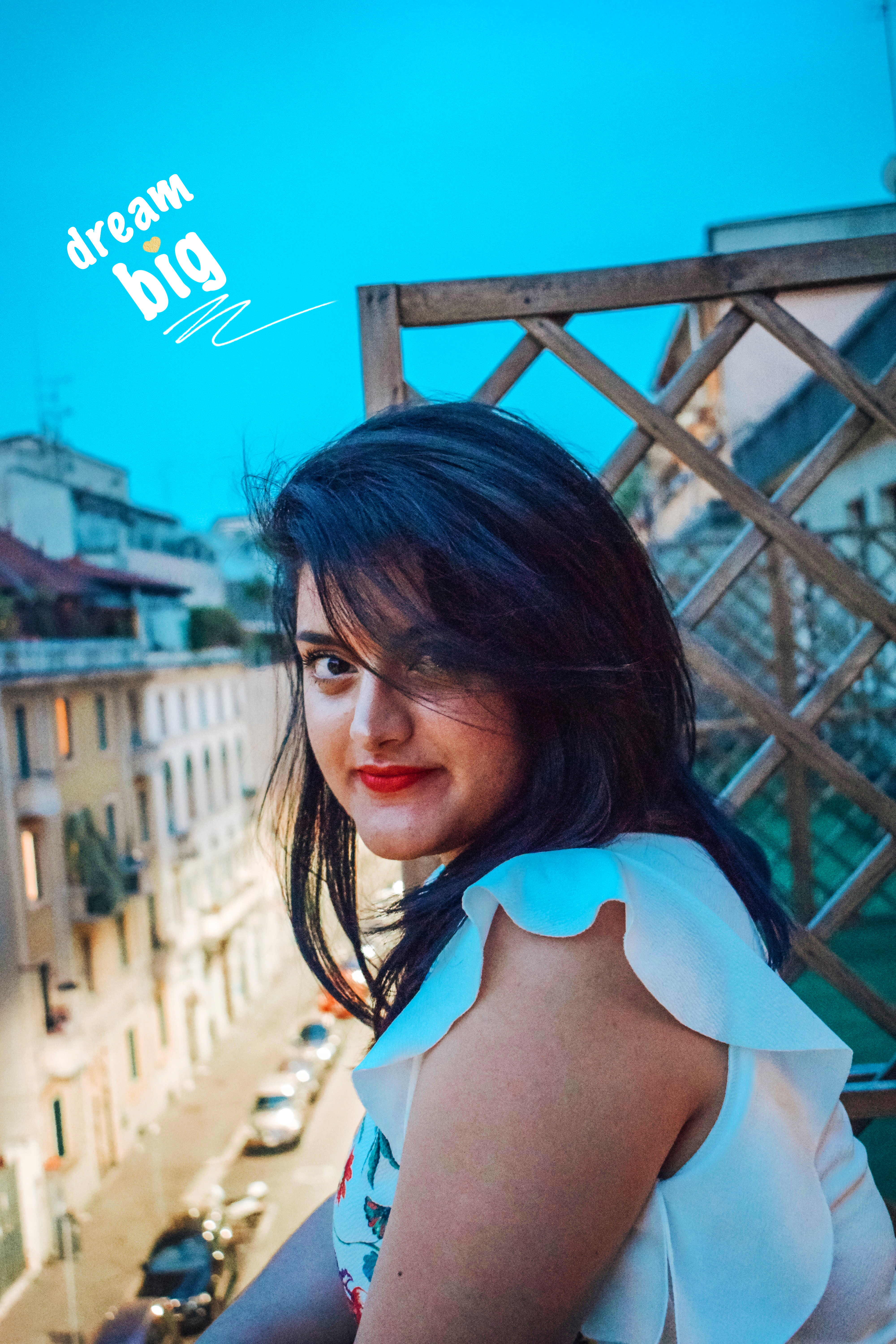 What’s It Like Living In Italy As An Erasmus+ Student 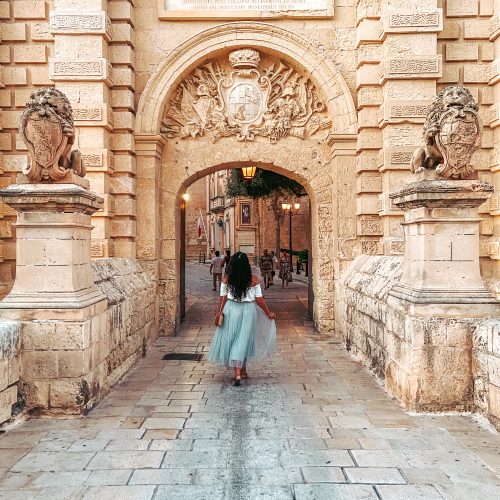 When Is The Best Time To Visit Malta?- Tips For Every Season 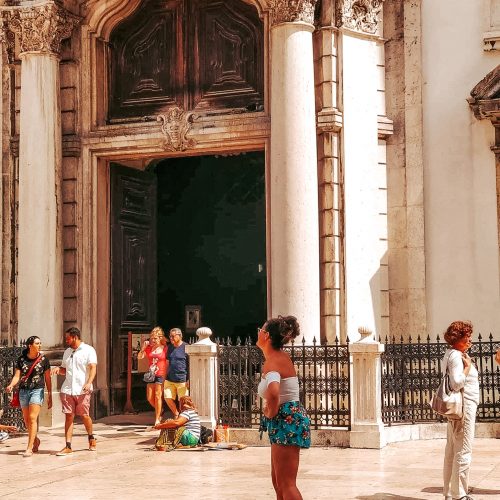